Mount Elbrus with other mountains more 5000 m high belonging to Great Caucasus Ridge, attracts mountaineers from all parts of the world. The routes to Mt. Elbrus are not difficult. It is possible to reach the peak without having a high-degree qualification, but nevertheless climbing to Mt. Elbrus becomes popular more and more with mountaineers, as Elbrus is the highest peak of Europe and Russia from Portugal till Kamchatka.

From the point of view of modern mountaineering as a sport Elbrus does not present any insurmountable difficulty. There are many routes leading to its peaks, and they are all comparatively easy. The main dangerous during an ascent are the snow-covered fissures in glaciers and the low temperatures.

Elbrus is the first test of endurance, of ability to overcome the depressing effect of mountain sickness and cold. Actually, it is a fairy easy ascent in good weather. In bad weather, and especially in winter, it is not so easy to reach summits of Elbrus. Its snowy expanses have witnessed many difficult and dangerous rescues.

The simplest and the most popular is “Classical Climbing Elbrus” by swing cableway “Elbrus”, begining from Azau glade (2350 m):

In previous years the base camp for climbing Elbrus was hotel Priut-11. It was burnt in August 1998, during the sudden night fire. Constructed near former Priut Diesel hut(4200m) can accept climbers now. Two-storey hut for 50 persons with, kitchen, gas, electricity.

Now the main camp base is situated on mountain hotel “Gara-Bashi” (3800 m). It represents 14 “barrels” for 6 persons each, of cylinder form (in Russian so-called “Bochki”), for 80 persons generally. There are two dining-rooms for 15 persons each, including gas stoves on liquid gas. Every barrel has electricity with electric heating.

For the acclimatization effect climbers stay two nights on altitude 4000m. First day for acclimatization ascent to Pastukhov’s rocks (4800m). Early morning second day is planned the climbing to the top of Elbrus at about 2-3 o’clock a.m. in direction to the Pastukhov’s Rocks (4,800 m), then to the saddle of Elbrus, here tourists have one hour rest and go to the Western or Eastern summit.
There is a snow tractor – special mountain tractor, which can take till Pastukhov’s Rocks in several minutes.

Some climbers go to Elbrus on foot not using cableways, from Azau glade (2350m.) till hotel “Priut11″ (4200m.). Such way, depending from the training of tourists takes 6-11 hours and demands high physical strength.

The route till “Mir” station (3500m.) is going on the road, which was made by the members of the “Society of proletarian tourism and excursions” long before the launch of the cableways “Elbrus”. They climbed along the ancient lava flows parting the glaciers Large and Small Azau, to “The Old Outlook” and higher between the glaciers Small Azau and Gara-Bashi, where the station “Mir” is constructed now. This trip was long and difficult.

While ascending from the Azau station (2350 m) up to the Elbrus slope the bottom of the Baksan glade is removed further and further, the mountains part, from behind the green and brown slopes occur white snowflakes and greenish glaciers. Above them the legendary summits of the Elbrus region shine. The closest of all above the starboard of the glade there is a wall with an ice cap – Donguz-Orun-Bashi, in some moments it seems to appear a truncated pyramid – Nakratau. More to the left there are two black triangles – Large and Small Kogutai.
On the next turn the road approaches to the breakaway into the Azau gorge. Having mounted scree it is possible to see a rare panorama: above the Large Azau glacier (it will be not seen higher) the broad pendulous glade is opened. Closer, by the breakaway, there is “A Sand Hotel” – a common place of the tourist bivouacs. On the right of a course from behind a slope is seen the ChiperAzau pass, more to the right, between small summits above the glacier there is the Azau pass, and more to the right between two rocky turrets is the Pass of an Echo of War is seen. At the end of the route the tourists should see its inverse slope.

Round the bending of the road on a herbaceous terrace there is a climbing cemetery. Soon the road is crossed by the spring (one of three, current from the Small Azau glacier) and mounts a slope of a ridge sectioning the glades of the Small Azau and Gara-Bashi glaciers. Here, on a flat ground, called by the tourists of the Society of Proletarian Tourism and Excursions as station “Stary Krugozor” 3000m. (The Old Outlook), there was constructed the station of the cableway “Elbrus”. A rise takes 2 hours, an altitude difference – 650 m.

The panorama from “The Old Outlook” is much wider, than from the road. Below as on a palm lays the Baksan glade up to the Adyr-Su influx. Nearer dominates two-topped Ushba. Below Donguz-Orun on the slope of a low-level summit Cheget-Kara-Bashi there are the piers of a famous cableway Cheget and a round building of the cafe “Ai”. Above the “Sand hotel” three snow saddles are visible: broad, undercut by a crack – a bergshrund – the Chiper pass, near to the Chiper-Azau summit – the pass of the same name, and between the summits – twins Chiper-Azau and Azau-Bashi – a narrow saddle Azau. The Large Azau glacier is not seen, but then a huge snow plateau Hotu-Tau was opened, feeding this glacier. Behind it there is a strip Hotu-Tau, connecting Mt. Elbrus with the Main Caucasian Ridge.

From “The Old Outlook ” the road is prolonged to the right on a course and on the moraine ridges climbs up to the “Mir” station (3500 m). A difference of altitudes – 720 m, ascend time- not less than 2 hours.

On this section of the route the ridges of the moraines and the lava flows go down, around them deep gorges swing open. In the upper lands of the Small Azau glacier gape the cracks of the icefalls. Sun becomes intolerably bright, starts to have an effect an altitude. Here is the station “Mir”. In its lodging the Museum of Defense of the Caucasus is opened. The return slope of the Echo of War pass is well seen. The panorama has moved apart. In the south and southeast the view on mountain range of the Zakavkazye opens.

From the “Mir” station of the Elbrus cableway on the side of Mt. Elbrus a road goes away. There is a steep take-off along a lava flow between the Small Azau and Gara-Bashi glaciers, to cylindrical houses of the builders of the Elbrus cableways, that is now tourists base “Gara-Bashi” (3850m.). Below there is “roundabout” of the lower station of the third queue of the Elbrus cableway. Soon the road goes to the right, and the tourists go on ascending a mountain path along a power line. Not far from a steep snow take-off the path passes to a glacier. Above the take-off open eastern ice fields of Mt. Elbrus. Above them raises its eastern summit. 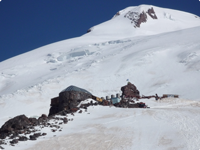 Under the summit, on rocky exits, there was constructed the building base “Priut11″ (4200m). Above them, on a snow slope under the summit is “the Priut Pastukhov”.

The route to the “Priut 11″ is marked with poles and sticks, but one can go on moving only at good visibility. A gently sloping part of the path along the glacier leads to the take-off to “Priut 11″. There are masked cracks, therefore it is not recommended to go aside the path. An altitude of the Priut11 is 4200 m, difference of altitudes from the “Mir” station is about 700 m. The transition takes 2,5 – 3,5 hours.

From “Priut 11″ there are well visible ridges of the Western Caucasus. More to the left of the ascent way on the rocks between Gara-Bashi and Terskol glaciers there is seen the “Ice Base”.
Having settled at “Priut 11″, one can make a radial hike to the rocks of the “Priut 9″. From here to the “Ice Base” the path goes away. One must take in account that on the Gara-Bashi glacier there are a lot of cracks, the path is not marked, and under the rocks there is a large crack – masked by mild snow.

It takes 5 or 6 hours from the Priut 11 to the saddle. On the left side of the saddle, under the west summit slopes, near the beginning of the snow mould the hut construction is situated. At the distance of 250 – 300 meters above the hut turn right from the saddle and over the snow slope with the simple rock places up to the rock shoulder. From the shoulder over the wide horizontal plateau come to the round on the Mount Elbrus east summit (5,621 meters). It takes 1,5 or 2 hours from the saddle to the summit. It takes 3,5 or 4 hours for the descent to the Priut11 going along the ascent line.